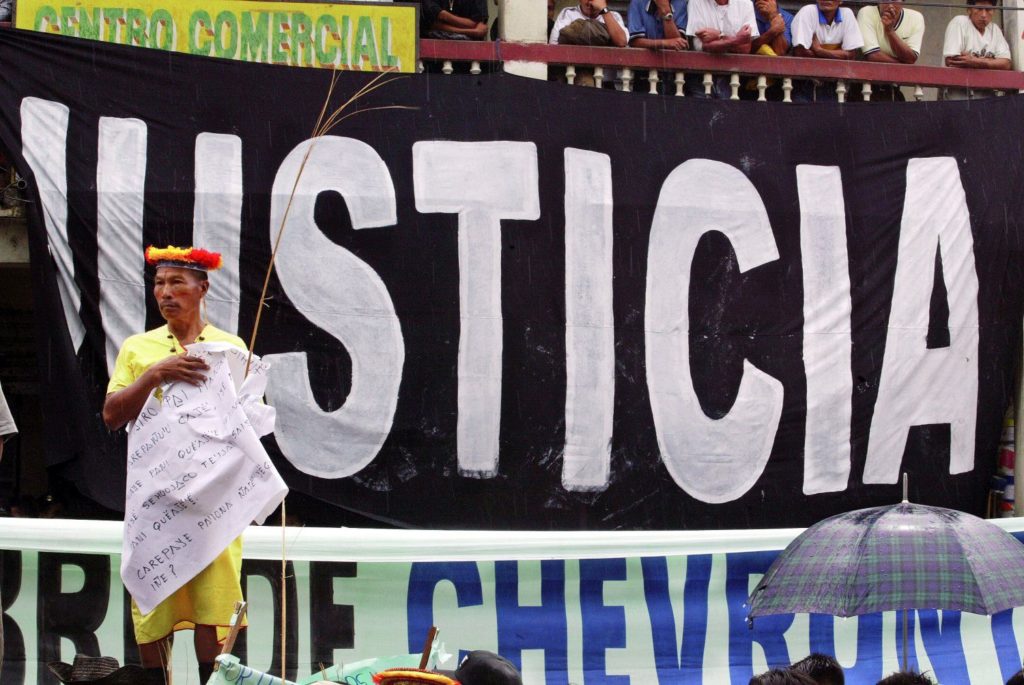 (Click here for more information on the Global Day #AntiChevron)

The Chevron-Texaco case, promoted in Ecuador by UDAPT (Union of People Affected by Texaco’s oil operations, including more than 30 thousand members) is an example of the structure of global impunity that benefits Transnational Corporations (TNC’s) in the violation of Human Rights worldwide and in particular in the Global South.

After 25 years of trial, despite the fact that the reparation award against Chevron (formerly Texaco) has been ratified at every level of Ecuador’s justice system, it has still not been enforced. Chevron (formerly Texaco) removed all its assets from Ecuador.  The affected communities turned to foreign courts to homologate and enforce the Ecuadorian verdict. In Brazil, Argentina and Canada, their lawsuit was dismissed. As an attempt to stop impunity, the affected people have also filed without success a complaint with the International Criminal Court (ICC).

Meanwhile, the 30,000 affected people continue to suffer serious health impacts. Deaths with cancer are 130% more frequent and the mortality risk is 260% higher than in other areas of Ecuador. Cancer represents 32% of all deaths, 3 times more than the national average. Miscarriages are 150% more frequent than in other areas. The rates of morbidity, dermatitis, respiratory, renal, hepatic and digestive troubles are more frequent in this area. On the ground, the more than 880 pits filled with oil left Texaco are still there. The rivers are still full of hydrocarbon sediments and contaminated by oil spills. For more than 40 years, these impacts have not been adequately remedied. The crime continues.

The Chevron case in Ecuador is not an isolated case. Transnational corporations can count on a system that guarantees their impunity worldwide.  For affected communities, many obstacles raised by this system seem sometimes insurmountable. Chevron uses the legal structure of its subsidiaries to evade responsibility. The company uses its economic power to pressure on governments with investment offers. It uses its country of origin support and protection, bilateral investment treaties (BITs) and international arbitration systems. It takes advantage of a weak or non-existent international justice system to judge corporations. It uses domestic justice systems to pressure and turn them against those affected. It uses the media to put its truth and defame affected communities. Despite this reality, the affected communities grouped in UDAPT continue to struggle to break the system of corporate impunity and to access to justice.

Chronology of the judgment

Videos of the affected communities with English subtitles

More information on the case