5 years of injustice in the Doce River Basin! 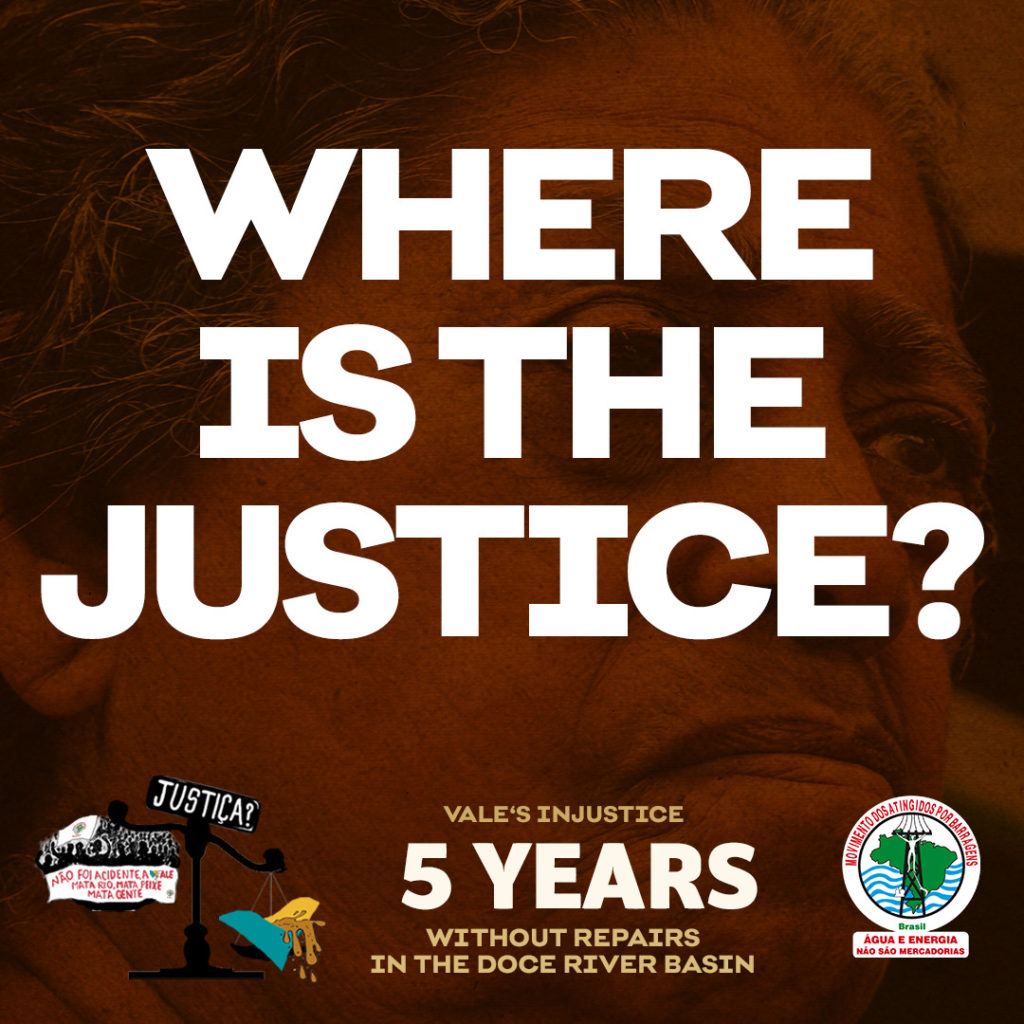 The crime of Samarco, Vale, BHP Billiton destroyed about 670 km of extension of the Doce River and part of the coast of the state of Espirito Santo five years ago. Around 500 thousand people were affected by the rupture of the Fundão dam in Mariana, and are still without rights and reparation. People lost their homes, work and income, access to water, and their health is deteriorating. Many lives have been destroyed.

Hundreds of families are still living in rented houses because, after five years, the company SAMARCO has not resettled nor accepted to repair families with new homes and suitable workplaces.

The justice system and state structures are increasingly captured and dominated, acting as servants of the international companies that dominate the region.

The Movement of People Affected by Dams, on this date, denounces that Vale has “(in) justice” in its hands. Injustice because there are five years without adequate reparation for the rights of families that have been affected along the Doce River basin and the Espírito Santo coast. Injustice because the judiciary is in the hands of the mining companies, acting against the people affected to protect the extraordinary profits of the big capital.

Despite the gravity of the situation, we reached half a decade without repairing the rights of those affected. Impunity is evident. In the region, profit was placed over life. Crime is “renewed” daily in the places where the sludge of injustice passes.

There is no longer adequate health among victims. In the case of women, studies have revealed that they are not being recognized as affected, by the format of the registrations, and, thus, increases in reproductive diseases, domestic violence, alcoholism are registered, as side effects of damages and the disruption of work in communities.

The mud brought the loss of workplaces and income. Sectors such as fishing have been completely affected. To date, there is no ongoing program of productive and economic restructuring for families. On the contrary, those receiving emergency aid have become dependent, with no transition policy on the part of companies, only the annual threat of a cutoff of the aid.

Many indemnities were paid insufficiently, the money did not solve problems of jobs and places of work, nor housing. In short, the crime has impoverished families and deepened their dependence.

While the rights are denied, in the last quarter of 2020, Vale doubled its profits, which were announced at the level of R$ 15 billion. Despite the extraordinary profit, the company did not allow the completion of any of the three resettlements it undertook, nor did it serve the 10 communities that claim the right to housing or complied with the agreements agreed with governments and justice institutions.

A new war of experts reports and negotiations is put on the field, under a complex corporate architecture of devices of domination and manipulation.

In March 2016, governments and companies announced a major cabinet “agreement”, with no participation by those affected, which they estimated to spend around R$ 20 billion on solutions. In this agreement, the states transferred their responsibility in the crime management to a Private Foundation, created, organized, and managed by the companies that own Samarco (Vale and BHP Billiton), the Renova Foundation.

Half a decade later, Renova was unable to complete even the initial preliminary program for registering families affected. It proved to be a profit protection mechanism for Samarco, Vale, and BHP Billiton, as well as an instrument to capture and dominate the strategic structures of governments and the State and to violate and prevent the correct solution of the rights of those affected by dams.

Much of the funds used, estimated at R$ 10 billion by the Foundation, are destined to false advertising, fake news, co-optation, disorganization of the people, manipulation, and denial of rights to the victims of Samarco’s crime.

Of the approximately 95 thousand registrations and requests, only 19 thousand people receive emergency financial assistance, even with fishing and agriculture compromised in many parts of the basin to the present day.

With a strategic portion of the judiciary in the companies’ hands, the conflict has become more judicialized every year. Decision-making power was concentrated in the hands of a federal judge, who acts as a servant for the criminal company, who acts to defend the company and manipulate the affected families. To date, there has been no criminal liability for the deaths of the 19 people, or even for the other crimes. Fines due to both environmental damage and the delay in Renova are not paid or resolved.

The inequality of powers between those affected and companies is deepening every day. Half a decade and little has been resolved in the lives of those affected. The Renova Foundation invests in the tactic of dividing the people and the slowness of the solution.

People no longer have time to wait for adequate integral reparation and are vulnerable to unequal agreements to survive in a territory where the company dominates the decision structures through a complex scheme of co-opting of leaders, corporate capture of governments, and the justice system itself.

The companies set up a powerful domination scheme that privileges the privileged and penalizes people who have been affected by Samarco’s crime.

What the crimes in Brumadinho, Mariana, Congonhas, Ouro Preto, Macacos, and so many other territories, shows us that the dam ruptures are not a fatality, a fluke, are intrinsic to the perverse model of mineral exploration in Brazil.

Despite all the injustice, affected people from the whole basin resists and reaffirm their commitment to continue fighting until the resolution of all the problems that Samarco, the Renova Foundation, Vale, BHP Billiton, and their shareholders have caused and have been causing to the people of that region.

We are the victims of a barbaric crime that is far from a correct solution, but we are also people who struggle and are willing to fight and put life above profit They will not be able to silence the power of the affected people. With our heads held high, we will continue organizing and mobilizing, in another year, to denounce the violence of large corporations, impunity, the complicity of governments, false prophets, and representatives on duty.

We announce here, as affected people from the Doce River basin and the Espírito Santo coast, that we will continue on the march, in struggle, for several more decades. Until our region ceases to suffer from the “curse of the abundance” of water, minerals, land, and oil. Until our wealth is shared among us, the Brazilian people so that no child of ours wakes up without knowing whether it will have food or education until we are a sovereign, independent, and a popularly controlled country capable of guaranteeing all rights and full reparations to all.

Water and energy with sovereignty, distribution of wealth, and popular control!