25 May: The New EU-Mexico agreement. All that glitters is not gold 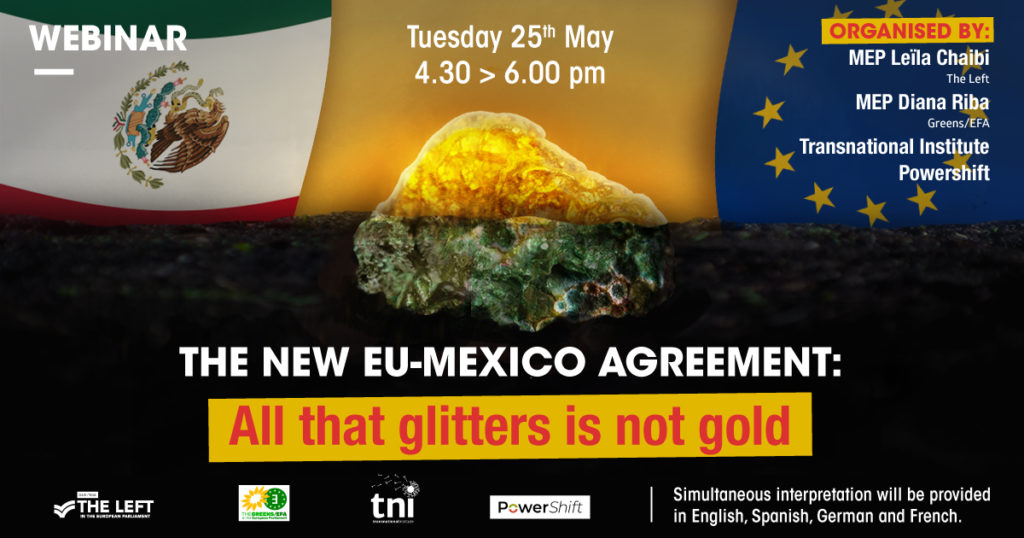 The New EU-Mexico agreement: All that glitters is not gold

Simultaneous interpretation will be provided in English, Spanish, German and French.

Cristina Faciaben, Secretary of International and Cooperation of Comisiones Obreras

Questions and comments from the public

But all that glitters is not gold. According to research headed by PowerShift, the new agreement doesn’t really mean good news for human rights and environment. Rather, it might give new impetus to liberalisation and deregulation for trade, privatisation and will have negative impacts on employment. It would also include a chapter on investment protection, which would make Mexico the first Latin American country to sign a treaty with Europe that includes this dimension. However, no serious and binding regulations would be included to address corporate accountability. The International Caravan on the impacts of free trade and transnational corporations in 2019 confirmed the existence of environmental and sanitary emergency zones in the industrial corridors where important European investments are located in Mexico. The new agreement can even deepen the current asymmetry established between human rights and the interests of corporations.

Even from a European point of view, the analysis is not more optimistic. Mexican agricultural imports will be to the detriment of European producers. Once again, it is the farmers who will pay for the consequences of trade liberalization.

This Webinar aims to open a dialogue among European and Mexican members of Parliament and civil society to promote a collective reflection on the main challenges the new agreement presents for human rights and the environment. There will be a presentation of PowerShift’s research, as well as a testimony from affected communities in Mexico.  MPs and civil society representatives will be able to comment and there will be an open exchange between speakers and participants.

Simultaneous interpretation will be provided in English, Spanish, German and French.