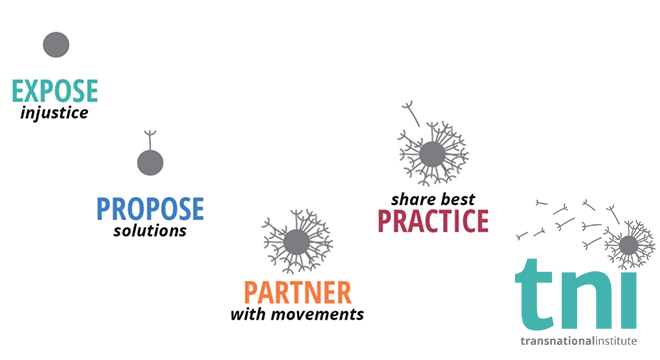 Ten years ago, the financial sector brought the world to the edge of a precipice. The shock waves continue to shake us today as austerity and corporate impunity have fuelled anger that the reactionary right have most successfully captured. But the banks that caused it all have not only survived, they have emerged even stronger. Popular outrage and even populist politicians have proved no match for financial power.

Today 9 out of 13 of the world’s most powerful financial institutions are considered Too Big To Fail. Why is the banking sector so powerful? How do they exercise this power? What are their weaknesses? How can social movements more successfully expose and hold finance to account? What alternatives do we have to private finance?

To answer these questions in TNI’s eighth edition of its State of Power report, we worked with researchers to develop powerful infographics, commissioned high profile activist-scholars and opened a call to our community for analysis. We then worked with a talented Indian illustrator Orijit Sen and graphic designer Evan Clayburg to visualise them. We are very proud of the results. If you like them too, please share them via email or social media with your networks.

The Latent, Unused Power of Citizens and the Production of Public Collateral

Despite the rhetoric of bankers and politicians, private finance is far more dependent on the public than we think. Taxpayers in the richest nations provide the public collateral on which nearly all financial activities today depend. It’s time to use that leverage to hold private financial institutions to account and to invest in the Green New Deal.
> Read online

Battling bankers: insights on financial power from the grassroots

Three inspiring activists – from Spain, UK and Kenya – who have scored significant victories against the financial leviathan share their experiences of taking on bankers and the lessons and insights from their ongoing struggles.
> Read online

Saskia Sassen explores the extractivist nature of finance and how it impacts on cities in particular, as well as the possible fractures in financial power that open up the possibility for urban movements to confront and bring finance under public control.
> Read online

The rise of offshore finance is not solely about capital moving to banks in exotic islands, it is also about the creation of a two-tier global system in which ordinary citizens are subject to laws, taxes and increasingly authoritarian rule, while offshore residents live secretive, tax-free lives with their fortunes supported by expansionary monetary policy.
> Read online

Banking on public power: Lessons of the Institute of International Finance

It is little known, but the International Institute of Finance is probably the single most important reason why financial reform in the wake of the economic crisis has been so limited. But its power is not just the way it has represented and coordinated its international membership, but the way decision-makers have given it an unprecedented role as interlocutor on financial issues.
> Read online

Tackling financial power requires not only examining the power of certain institutions like the Too Big To Fail banks, but the role financialisation has within the global economy in the context of capitalism’s tendency towards overproduction and supply outstripping demand owing to the persistence of great inequality.
> Read online

Art – Capital of the Twenty-First Century

Finance has always created reality out of beliefs and stories, turning appraisal into numbers and thoughts into stock market fluctuations. It is a world that artists understand well, challenging its power with its very means.
> Read more

The merging of finance and technology – and especially the heavy promotion of digital payment systems –  is gentrifying finance, advancing an agenda of corporate control and surveillance at the expense of informality and the exclusion of the most marginalised.
>Read online

Based on original research exploring the financing, lending, ownership and board interlocks, this essay shows how finance and fossil fuel firms in Canada are intertwined and impede a green transition.
> Read online

The Next Shareholder Revolution

For radicals going back to Marx, corporate stock provided a template for both the socialisation of ownership and redistribution of income. Could a convergence of ethical activists, pension funds, socialist politicians herald a new shareholder revolution?
> Read online

The power of public finance for the future we want

Public finance and banking is more available than often portrayed – and there are plenty of examples of public finance that can inspire us to both raise and channel finance in a way that will address today’s social and environmental challenges.
> Read online

The Data of Money

The international bank transfer system, SWIFT, is a form of contemporary digital colonialism and surveillance capitalism as it is run by US firms and provides data to US government agencies.
> Read online

Rome decides: financial power against a city of solidarity

A case study that explores how Rome became indebted, how it was used to impose austerity and privatisation, and how citizens organised a debt audit to expose and challenge financialisation.
> Read online

The beautiful illustrations were designed by Orijit Sen and the infographics by Evan Clayburg.