Israeli Apartheid in the Jordan Valley: Abu Saqr and his family arrested on charges to access water 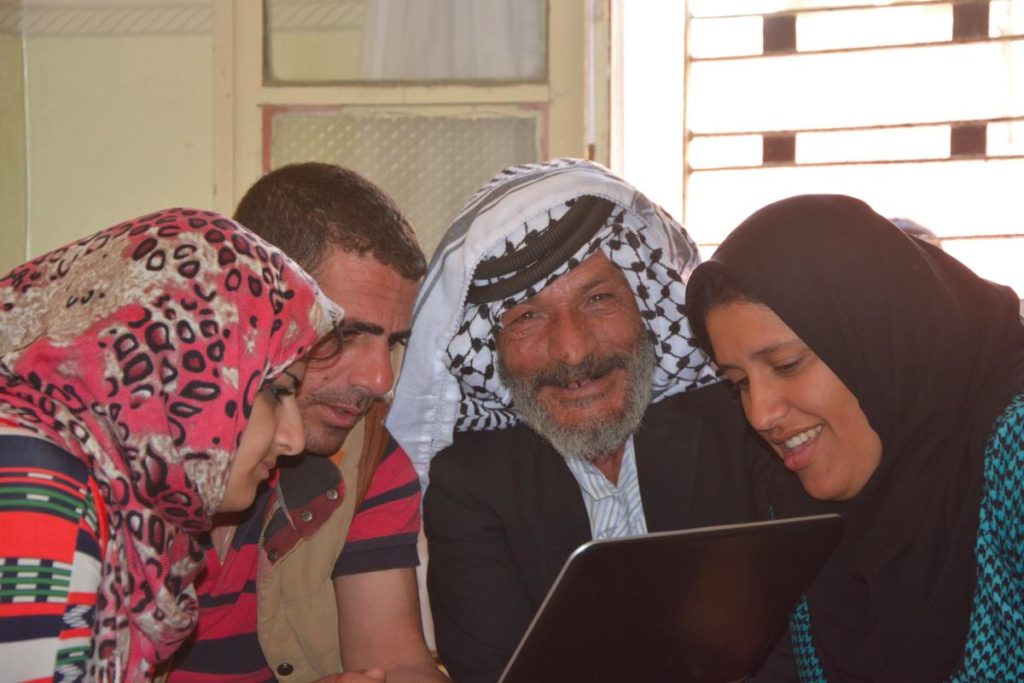 At about 1:00 AM on Wednesday, around fifty heavily armed Israeli soldiers surrounded the home of Abu Saqr with their military jeeps and arrested him and his twenty-two-year old son, Sakher. An hour before the detention of Abu Saqr and Sakher, Israeli soldiers raided the home of Ashraf, Abu Saqr’s son-in-law and a father of four young children and arrested him. Later on, they were accused of ‘stealing water’, which Israel’s national water company Mekorot illegally appropriates from Palestinians to serve, among others, Israel’s settlement project. After a grueling 20 hours in detention, without food or water, all three have been freed for now.

Abu Saqr is a prominent leader of popular struggle in the Jordan Valley in his mid-seventies. He and his son Sakher live in the Bedouin community of Al-Hadidya while Ashraf lives in another Bedouin community known as Khallet Makhoul, both are located in northern Jordan Valley, Occupied West Bank. Al Hadidya is inhabited by around two hundred people while only 5 families reside in Khallet Makhoul. Like in other Bedouin and rural communities in the Jordan Valley, the number of families in the two communities has decreased due to ongoing measures of persecution, repression and expulsion the Israeli apartheid system subjects Palestinians to. People of Al Hadidya and Khallet Makhoul communities are a constant target of home demolitions, confiscation of land and water resources.

Stealing water from the pipelines transferring water to Israeli illegal settlements living in the area was the charge Abu Saqr, Sakher and Ashraf were accused of. Abu Saqr denotes that “while the Israelis criminalize us by claiming that we ‘steal’ water, we are not looters of water as getting access to it is a birthright that we should never be held accountable for. Rather, the Israeli occupation authorities must be held accountable for their crime depriving us of the backbone of life, water.”

This is the third time the Israeli occupation arrests Abu Saqr while Ashraf was arrested twice. Concerning Sakher, Abu Saqr says, “they regularly arrest my son. I cannot even count how many times they detained him.”

Abu Saqr further comments that “the vehicle that transported us was a microcosm of Israel’s larger apartheid system. The vehicle was divided into two sections. One of the sections was for the police officers and driver, where it was perfectly cooled by air-conditioning. The other section we were placed in, on the other hand, was like inferno, especially in the hot summer of the Jordan Valley, where we kept sweating all the way to the police station.”

Due to the spread of the COVID-19 pandemic, Abu Saqr emphasizes that this time, the arrest conditions were harsher than previous times. “We had to wear masks as a protective measure and the Israeli soldiers blindfolded the three of us,” narrates Abu Saqr. He also adds that “since the moment they arrested us, we were handcuffed until 9:00 PM, which means we remained handcuffed for about twenty hours. Of course, during the twenty hours, they offered us no food or water.”

“This experience of detention was the worst not only due to the spread of the pandemic,” Abu Saqr asserts, but because of the intensified humiliating measures they used against us during the detention. Abu Saqr adds, “my son appealed for hours to the soldiers to let him go to the bathroom. His appeals were met with rejection at the beginning; then, they accepted to let him go not to an in-door bathroom inside the military base, but outdoors in a nearby hill while he is escorted by soldiers.”

The three detainees had to spend the twenty-hour-detention period in a military base in the Jordan Valley without being interrogated or allowed the right to know the reason of their arrest. “Whenever I tried to speak or ask the soldiers why they detained us, they used to yell at me saying, SHUT UP!” says Abu Saqr.

“Only in the police station, where we were interrogated,” Abu Saqr comments, “we could know what we are accused of. There was also an officer working with Mekorot  present at the arrest raid. He was handcuffed and apparently accused by the Israeli military and Mekorot of helping the community to access water.

The accusation against Abu Saqr’s, Sakher’s and Ashraf’s of attempting to access water de facto only underline Israel’s illegal actions. Israel violates the international law, as recognized by General Comment No. 15 of the UN Committee on Economic, Social and Cultural Rights, which states that the “human right to water entitles everyone to sufficient, safe, acceptable, physically accessible and affordable water for personal and domestic uses” as well as for the production of food. Access to safe drinking water is also affirmed in Article 14(2)(h) of the Convention on the Elimination of All Forms of Discrimination against Women, Article 24 of the Convention on the Rights of the Child, and Article 28 of the Convention on the Rights of Persons with Disabilities.

Although the Jordan Valley is affluent with water resources with 60% of underground water being located in it, Palestinians there, especially the ten thousand Bedouin people living in roughly 85 communities designated as Area ‘C’ suffer from the scarcity of water. Such communities consume about 20 liters of water per person a day, which is below the 100 liters of the amount of water recommended by the World Health Organization. Settlers, on the other hand, enjoy an unlimited access to the water resources situated in the Jordan Valley. Israel’s exercise of sovereignty over Palestinians’ water resources for the sole benefits of Israeli settlers have been fulfilled by Israel’s national water company, Mekorot. Mekorot sustains water apartheid in the Jordan Valley by implementing projects that ensure Palestinians’ lack of access to their water resources. The most recent of which is the bypass pipeline system near the village of Bardala, northern Jordan Valley. This project would facilitate the transfer of water supply to nearby settlements while bypassing Palestinian towns and communities. Palestinians, on the other hand, are not allowed to build their own water infrastructure.