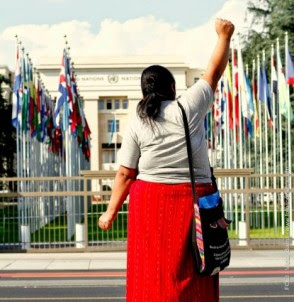 On the anniversary of the UNHRC resolution, as states prepare for the first meeting of the intergovernmental working group for the elaboration of a UN Treaty on transnational corporations and human rights (6-10 July 2015 in Geneva), this Feature Map updates the state of the 13 cases presented in the Geneva PPT Hearing (June 2014) and serves as an important reminder of the continuity of the impunity that triggered that hearing, hence restating the need for such an instrument to respond to the need for access to justice of so many affected peoples.

The Global Campaign to Dismantle Corporate Power and Stop Impunity – a coalition of over 190 social movements and organizations – organized in 23 June 2014, the Geneva Hearing of the Permanent Peoples Tribunal (PPT). This PPT Hearing inaugurated the Week of Mobilization to Stop Corporate Crimes and Impunity (23-26 June 2014), which was organized by a coalition of social movements, networks and civil society organizations known as the Treaty Alliance. Several events took place during the last week of the 26th session of the United Nations Human Rights Council (UNHRC), which had to discuss on whether to launch a process to create a binding human rights instrument for transnational corporations (TNCs). The Week of Mobilization represented an important moment for social movements and civil society organizations to converge and work collectively for a stronger and effective system to defend human rights and the environment from corporate crimes and violations.

During the PPT Hearing, representatives from affected communities testified on the disastrous impacts of corporate activities in different sectors. The tribunal heard testimonies regarding the environmental devastation caused by oil companies, such as the decades-long pollution by Chevron in the Ecuadorean Amazon and by Royal Dutch Shell in Nigeria. Other cases exposed how human rights are systematically violated when water is taken out of public or commons control and handed over to corporations, like in the cases of the Coca-Cola Company in Colombia, Israel’s water services company Mekorot in Palestine, and the Spanish dam company Hidralia in Guatemala. The mining industry also proved to be not only endangering the environment, but also violating directly human rights. Cases involving the activities of the Canadian company Pacific Rim Mining/Oceana Gold Corporation in El Salvador, and the UK based Lonmin Corporation in South Africa, underlined how militarization and violence against affected populations is at least as problematic as environmental damages. In this sense the case of Anglo-Swiss mining giant Glencore was emblematic due to the global reach of a single company, and testimony from communities affected by Glencore in Peru, Colombia, Zambia, the Democratic Republic of Congo, and the Philippines provided a clear example of how TNCs violate human rights worldwide with complete impunity. What was most significant as a crosscutting element in all the cases presented at the hearing was the systematic blockage to access justice and obtain remedy for the many victims of intimidation, persecution, murder and environmental destruction.

As a result, the PPT reaffirmed what it had already found in previous sessions, based on the further evidence presented in Geneva. This is, that ongoing and past violations of peoples’ and human rights by TNCs urgently demand radical action.

By the end of the Week of Mobilization, on June 26, the claims of the witnesses that took part in the PPT Hearing were echoed by the adoption of a historic resolution by governments at the UNHRC (A/HRC/26/L.22/Rev.1).[1] This established an intergovernmental working group (IGWG) with the mandate of drafting a legally binding instrument to enforce human rights obligations on TNCs. Human rights defenders and communities affected by TNCs, along with social movements and campaign networks, all played a key role in achieving this important step towards ending impunity. On the anniversary of the resolution, as states prepare for the first meeting of the IGWG (6-10 July 2015 in Geneva), this Feature Map updates the state of the cases presented in the Geneva PPT Hearing and serves as an important reminder of the continuity of the impunity that triggered that hearing.

The Geneva PPT Hearing was a continuation of three other sessions, which were previously organized by the bi-regional network Enlazando Alternativas to judge 46 cases of human rights violations committed by European TNCs in Latin America[2]. Like its predecessors, the Geneva Hearing put a spotlight on the actions of TNCs, the complicity of governments in their ongoing violations, and on the global legal, economic and political regime that constitutes the systemic elements of the Architecture of Impunity, such as Free Trade and Investment Agreements. The Geneva Hearing was also linked to other upcoming processes, such as the PPT sessions in Mexico and Canada, the preparation for a Session on TNCs’ violations in Southern Africa, and one regarding the retail industry in Asia.

These political processes, led by social movements, affirm that the struggle for an alternative juridical framework is part of a much broader and fundamental strive to abolish the hegemonic corporate regime of domination, and to establish peoples’ sovereignty over the commons and reclaim public interest from corporate capture.

This Feature Map was prepared by the Global Campaign to Dismantle Corporate Power and Stop Impunity, through a collaboration of some of its members: the Transnational Institute (TNI), the Observatory on Debt in Globalisation (ODG) and, most importantly, the affected communities movements and allied organizations directly responsible for the presentation of each of these emblematic cases as referenced in the Map.