Friends of the Earth

PL 572/2022 is launched as a breath of fresh air among so many injustices committed against the human rights of Brazilian people, from the ones affected by the burst of dams to workers in corporations.

Last Tuesday (03/29), MP’s and leaders of popular movements presented in the Chamber of Deputies the bill (PL) 572/22. It is established as a legal mark in the History of Brazil concerning business and human rights. Entered on March 14th, 2022, it is called “Framework for Business and Human Rights (PL 572/2022)”. Filed by a group composed of MP’s and organisations of civil society, including congresspeople Áurea Carolina (PSOL/MG), Carlos Veras (PT/PE), Fernanda Melchionna (PSOL/RS) and Helder Salomão (PT/ES),  and with draft elaborated from a study by HOMA (Centre for Business and Human Rights of UFJF), with the support of Friedrich Ebert Brazil Foundation, CUT (Workers Central Union), MAB (Movement of People Affected by Dams) and Friends of the Earth Brazil, the bill was registered  on the International Day of Action against Dams, in a landmark in the defence of the populations which have had their rights constantly disrespected. The collective press interview about the bill had the participation of  member of the European Parliament Miguel Urbán from Anticapitalistas in Spain, and a prominent member of the left wing bench in that Parliament, who was in a mission in Brazil to present a report on the negotiations and possible impacts of the free trade agreement between the European Union and Mercosur , among other agendas.

Despite being filed recently, the bill has historical reminiscences of struggle that have inspired its development. “We needed, both for the renewal of Brazil’s agreement with the UN and for the consequences of the international politics and of the movements, to elaborate our Brazilian framework. We know how the Bolsonaro administration wanted to make a fragmented legislation without social participation, not touching the core of our preoccupation with very serious cases which happen in Brazil like Brumadinho (MG) and Fraport (RS), which clearly violate human and labour rights”, explained Fernanda Melchiona, federal deputy for PSOL/RS. The bill is a work that has been elaborated by many hands, with a strong participation of social movements, organisations of civil society and the academy, which fight for human, labour and environmental rights. “Our goal is to open that debate in the congress, but we also want companies to have more accountability with human rights, with their employees. Besides the environmental aspect, we must consider the right of those people to life, to have those rights secured”, said Carlos Veras, federal deputy from PT/PE. MEP Miguel Urbán, from Anticapitalistas, Spain, added to that by quoting the discourse of former Chilean president Salvador Allende, still very relevant today despite having been pronounced in 1972 in the United Nations: “We are faced by a direct confrontation between the large transnational corporations and the states. The corporations are interfering in the fundamental political, economic and military decisions of the states. The corporations are global organizations that do not depend on any state and whose activities are not controlled by, nor are they accountable to any parliament or any other institution representative of the collective interest. In short, all the world political structure is being undermined.”, said he. 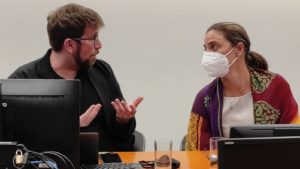 Miguel Urbán (E), member of the European Parliament from Anticapitalistas (Spain), contributed with information on the negotiations about the agreement and its possible impacts. Photo: Tiago Rodrigues

The bill contains in its essence guidelines of  Resolution nº 05 of CNDH (National Human Rights Council). The Brazilian constitution of 1988 had as a basic principle the granting of human dignity to everyone, guaranteeing basic human rights to life, work and equality, thus giving shape to a fairer society. 26 years after that, in 2014, the United Nations Human Rights Council passed Resolution 26/9, which was responsible for the creation of an Intergovernmental Work Group with participation of civil social organisations for the development of a binding document. The goal was, and still is, the regulation in the field of International Human Rights of the activities of transnational companies and other activities of transnational character. As in those two examples, Brazil is a signer and participant of several other policies which would supposedly guarantee Brazilian citizens would have their human and labour rights respected. However, in practice, that respect is not so present. In 2021, Brazil closed the year with 1937 Brazilian citizens rescued from labour conditions analogous to slavery, the greatest number since 2013. That way, the importance of bill 572/2022 has become even greater. “Corporate media usually gives the idea that environmental facts are natural. They are not called disasters. In fact, they are crimes, not only environmental, but socioenvironmental and cultural, which remove all the physical and spiritual space that affects the constitution of indigenous peoples, quilombolas and traditional communities”, stated the political and legislative assessor of APIB (Articulation of Indigenous Peoples of Brazil), Paulino Montejo.

With its 30 written pages, the bill reaffirms and highlights that human rights and their norms must be above any deal like economic, of services, of commerce and investments among others. The initiative is not only beneficial to the general population, but also to native peoples. Montejo explained that the Project incentivises the decrease in the trail of destruction and death caused by the uncontrolled advance of companies in indigenous and quilombola territory, not considering native peoples and the environment. When it was protocoled on March 14th, there was an even greater symbology because “it is the international day of action of the populations affected by dams, which also have historically been suffering with the violations to human rights regarding dams and big constructions”, said militant of MAB (Movement of People Affected by Dams), Sara Oliveira. “The Project was born in the work committee of the National Human Rights Council, which is working on a resolution called Resolution number 5, a very important framework to be a counterpart to the lack of governmental policies to confront the many violations in the field of human rights, in particular in the world of work”, said leader of CUT (Workers Central Union) Ismael César. He added that it is necessary to place life above profit. 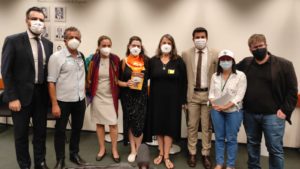 The participation of many MP’s, social movements and organisations emphasised the collective character of the elaboration of the bill’s draft. Photo: Tiago Rodrigues

In the case of bill 572/22, an extremely important factor was the articulation between members of the parliament, engaged academy and movements and social organisations to draft the text. For the next steps, be them to vote, widen the scope of the debate in public audiences and application of the law with the elaboration of public policies, the participation of society will keep being of fundamental importance. “Even with this government which is fascist, violator of rights, and works only for the companies, we managed to advance the draft of the framework with lots of social pressure”, said the coordinator of Economic Justice and Resistance to Neoliberalism from the Federation Friends of the Earth International and militant of Friends of the Earth Brazil, Letícia Paranhos. She argued that we must inspire the world, bringing a proposal which distances itself from voluntarism and marketing, be it green for environmentalism or purple for feminism; which is not based on a company’s checklist or proposals of business self-regulation. “We need to keep the articulation against transnational companies alive and advance in normative and regulatory frameworks because it will give us more strength to grow towards emancipatory political projects. If we want to have a strong left wing in power, we need to come up with proposals that make the States non-dependent on companies. Even in our fight for “Out, Bolsonaro” we also need to shout: rules for companies and rights to the peoples!”. That is an important step to end corporate impunity and, consequently, to advance the access to justice by the affected communities.

Bill 572 was directed to the Committees of Human Rights and Minorities (CDHM) and Constitution and Justice (CCJ). There is no date appointed for voting in those collegiates. Friends of the Earth Brazil and the other movements involved will keep bringing the news about the ways the bill follows. In the meantime, it is possible to know more about the subject and the fight to end corporate impunity in Brazil by accessing the popular booklet elaborated with ATBr, MAB, HOMA and TNI (Transnational Institute).

Watch in this video the speeches of movements and members of the parliament on bill 572/72, which creates a national mark on Business and Human Rights.