Our concluding joint remarks of the 8th session 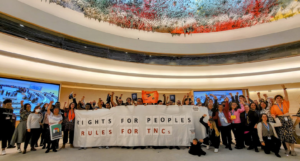 I am Julia Fernandes, from the Movement of People Affected by Dams, and I speak here on behalf of the Global Campaign, the Treaty Alliance, ESCR-Net, the Young Friends of the Treaty, and members of the Feminists for the Binding Treaty.

The task that brings us all here is clear: make TNCs and other businesses enterprises (as defined by Resolution 26/9) accountable wherever they operate. At the outset, we maintain that asymmetry in legal systems is staggering: hard law benefiting corporations on trade and investment (like WTO Agreements, Investor-State Dispute Settlement mechanisms in BITs, FTAs); and soft law for human rights, like (UNGPs, OECD Guidelines). Corporations are able to use the gaps in international law for their benefit.

From the start, we, civil society organizations, social movements, Indigenous peoples, trade unions, women, gender-diverse people, human rights defenders, migrant and refugee peoples, and affected communities have participated actively in the negotiations: defending the important mandate of Resolution 26/9, proposing language, bridging differences of opinion, interpretation, and provisions – all in the spirit of attempting to close the huge gap in international law that allows corporations to evade accountability. The participation of civil society must be strengthened, and not curbed like during the session on conclusions and recommendations this morning where we weren’t allowed to be.

We end here with a promise: the 5 networks here reunited will bring the results of this session to our territories, to the affected communities, to all organizations and movements that watch closely this process, and fight daily so that corporations don’t continue to enjoy impunity for their crimes. Next session, we will be here, pushing for a strong and effective binding treaty yet again.