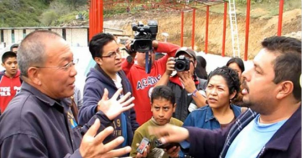 At the end of November 2012, time has accelerated in the popular struggles against gold mining and also against hydroelectric projects in the Sierra Norte of the state of Puebla. An assembly of at least 5000 people in Zautla decided on 23 November 2012 to throw out a small group of Chinese and Mexican employees working for the firm JDC, in a mine called La Lupe that they were  reopening for gold mining. Whether the company had a legal permission or not, the large assembly decided to march the local employees out with their machinery, and this was done ipso facto and without violence. This is not the first and will not be the last conflict between local populations and a new actor, the Chinese extractive industries in mining (copper, iron ore, gold…), in fossil fuels, or also in biomass extraction. La Lupe would have produced one kilogram of gold per day.

Meanwhile Mexico’s richest man, Carlos Slim, who made a fortune in telecommunications, has been involved in Telela de Ocampo (a few kilometres from Zautla) in starting another gold mine through a firm called Frisco. This would be Las Espejeras, an open cast mine using cyanide that would extract minerals which after processing would produce 4 kilograms of gold per day (at about 1 gram of gold per ton). There has been much opposition over the last few months in the city of Telela against Carlos Slim’s attempts to start exploration before getting municipal and state permission. Finally, on 1st December 1st 2012, it was announced that Carlos Slim has been denied permission to mine. This is indeed spectacular news. It remains to be seen whether the new president of Mexico, Enrique Peña Nieto, will try and reverse this decision. Both in Zautla and in Telela the municipal authorities have sided with the people.

A third conflict in the same region opposes the Canadian Almaden company to the people of Ixtacamaxtitlán. As the movement spreads from local citizens groups and indigenous organizations such as Unidad Indigena Totonaca Náhua (Unitona) to academic groups and netwoks at the Mexican level, there are links with other struggles in other territories. For instance, the successful resistance against the Caballo Blanco mine near the nuclear power station of Laguna Verde in Veracruz has been a source of inspiration.