The report “Invisible hands?European corporations and the deforestation of the Amazon and Cerrado biomes” offers a survey of the involvement of European firms – including banks – at different stages of the supply chain of soy, meat and metal – industries which are the main drivers of the deforestation of the Amazon and Cerrado regions in Brazil. It is published as part of a new research project of the European Network of Corporate Observatories (corpwatchers.eu) on “European multinationals and authoritarian regimes”. 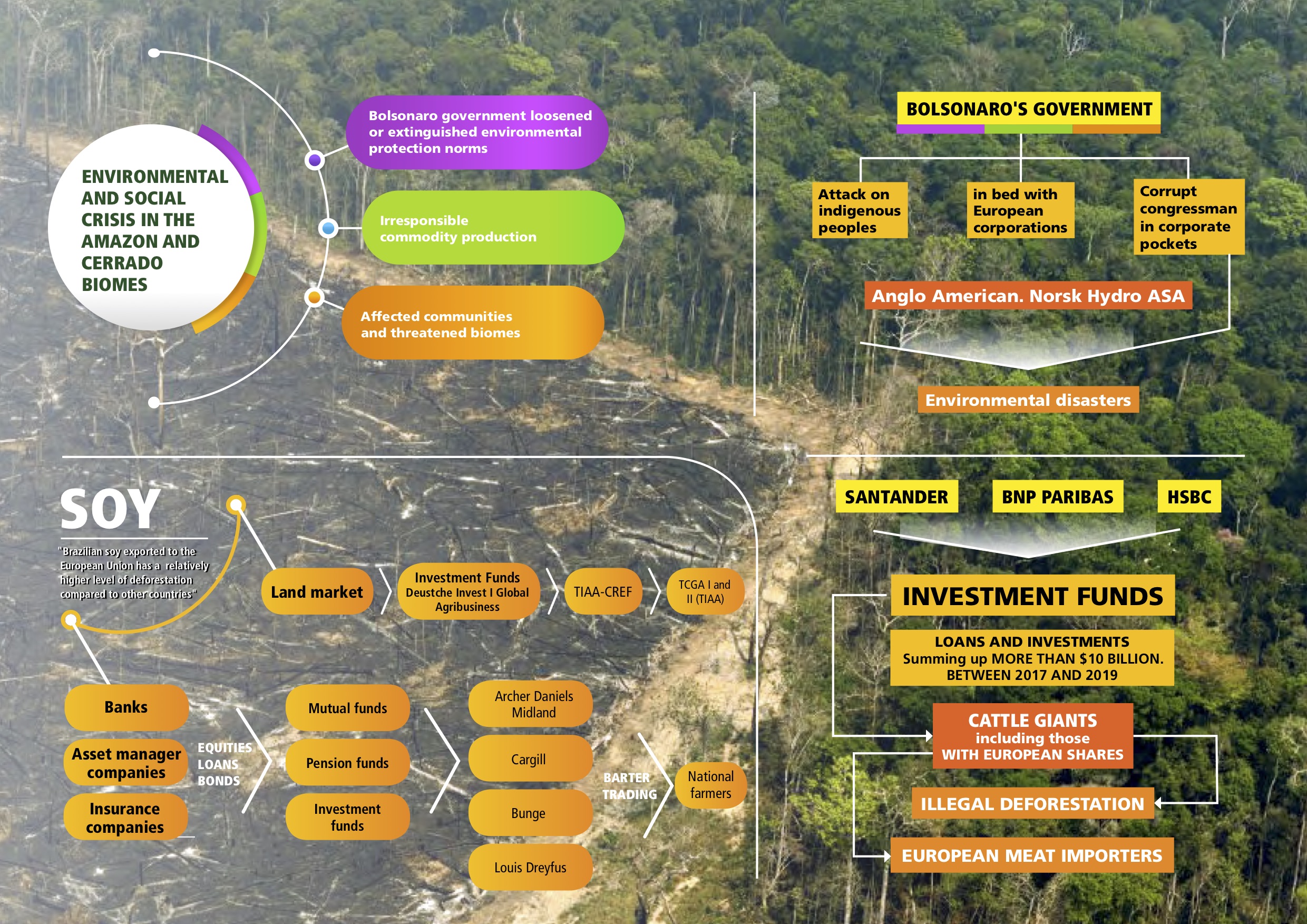 Together with the Congo rainforest in Africa, the Amazon is a key ecosystem for global environmental health, as it influences the climate through its role as a carbon sink and storage. The Brazilian Cerrado is the richest savanna in the world. However, large areas of these ecosystems are threatened by many economic interests: agribusiness, mining and illegal logging. In 2019, fires devastated large areas of the Amazon rainforest. In large part, these fires are the result of the practice of opening up grazing areas for cattle. Also in the Cerrado region, huge tracts of indigenous land vegetation have been converted into areas for grazing and agricultural production.

Brazilian President Jair Bolsonaro and his political and business allies – particularly in the agribusiness sector – are widely, and rightly, held responsible for the ongoing destruction of the Amazon and Cerrado regions. But while the national private sector has indeed been a driving force of this destruction, their power is leveraged by the support of transnational corporations, including European ones, argues the new report by the European Network of Corporate Observatories and Vigência, titled Invisible hands? European corporations and the deforestation of the Amazon and Cerrado biomes.

In 2016, for example, the Spanish bank Santander was fined $15 million for providing financial support to crops grown on illegally deforested areas. In addition to financial support, there are also European companies operating directly in the Amazon and Cerrado regions. Some are accused of rights violations, such as the French mining company Imerys and the Norwegian company Norsk Hydro. Recent studies also estimate that around two million tonnes of illegally planted soya each year in Brazil have reached the European market in recent years, of which 500,000 tonnes were produced in the Amazon region. 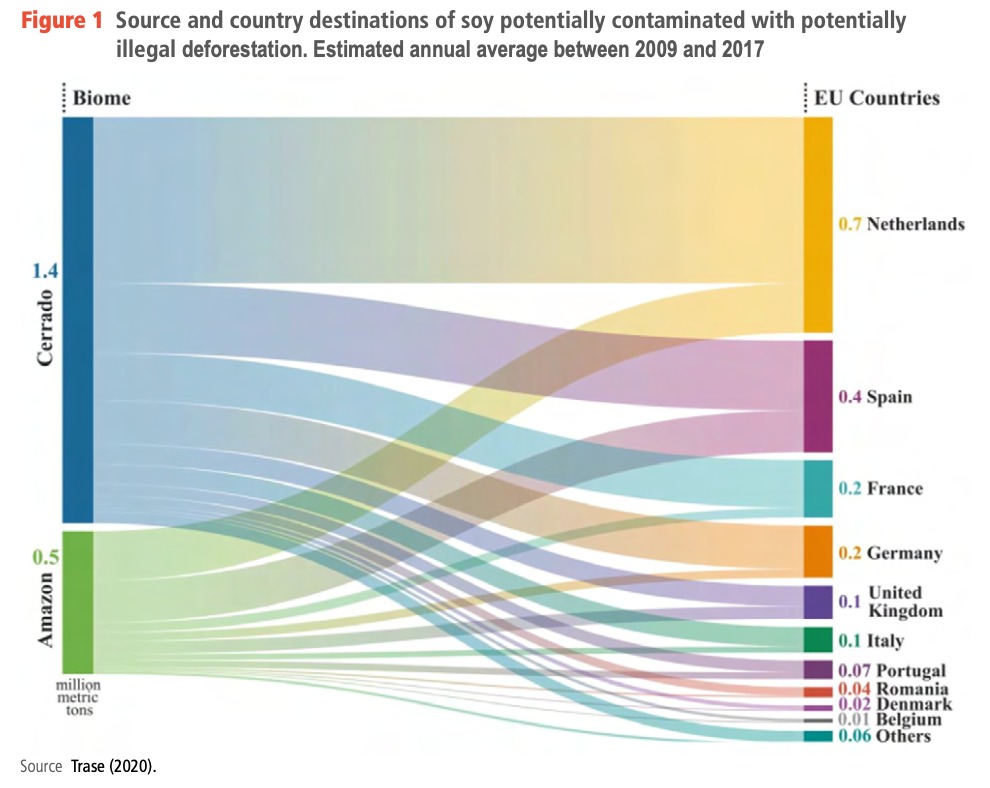 In the last 15 years, numerous land companies have been created in the two regions, entirely focused on the acquisition, sale, lease and management of agricultural land. In the Cerrado, large areas of indigenous land officially owned by the state are being illegally privatised. This process usually leads to the violent eviction of inhabitants (many of whom are from traditional communities or rural poor communities), as well as extensive clearing or deforestation. More recently, these agricultural areas have been sold to agribusiness companies or land companies, which can lease or sell the land. Three European investment funds contribute to the operation of these land companies in the Cerrado region: the German pension fund Ärzteversorgung Westfalen-Lippe; the Dutch pension funds Algemeen Burgerlijk Pensioenfonds and the Swedish fund Andra AP-fonden.

> Read the full report “Invisible hands? European multinationals and deforestation in the Amazon and Cerrado”, published by the European Network of Corporate observatories ENCO and Vigência: https://corpwatchers.eu/en/investigations/european-multinationals-and-authoritarian-regimes/invisible-hands-european-corporations-and-the-deforestation-of-the-amazon-and

The report is published as part of a new research project of the European Network of Corporate Observatories (corpwatchers.eu) on “European multinationals and authoritarian regimes”, which features two other case studies:

– The Congo Case, by ReCommon, investigates the relationships between Italian oil company ENI and its executives and the political elites of Congo.  https://corpwatchers.eu/en/investigations/european-multinationals-and-authoritarian-regimes/the-case-congo

– “So that everything can stay the same.” Could Europe’s Green Deal end up fuelling human rights and environmental abuse?, by Observatoire des multinationales, explores one of the dark sides of the much vaunted European Green Deal: how it could, in the name of helping Europe achieve its climate goals, encourage a corporate grab of critical resources in the global South such as minerals or land for large-scale renewables projects or reforestation projects.https://corpwatchers.eu/en/investigations/european-multinationals-and-authoritarian-regimes/so-that-everything-can-stay-the-same