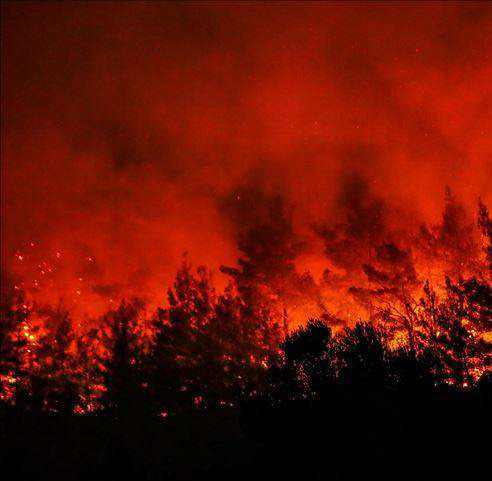 These days I am immersed in rage, pain and despair. The Amazon is in flames, the Chiquitanía is gravely wounded and beneath the fires, many of our hopes for Bolivia and the world are turned to ashes.

I don’t know if these feelings can be transformed into some measure of hope. For the moment there is only pain and bitter tears that flow from my eyes as much as I’d like to contain them. This profound pain blends in a bitter concoction with the daily distress that comes from breathing in poisoned urban air, drinking uncertain and fragile water and knowing that the food on our table is contaminated with invisible chemicals. This feeling of vulnerability that seems to continuously grow includes crimes against women, trafficking of boys and girls, the spread of the violent ideology of machismo, readily observed in the surreal and cynical political theatre that hangs like an absurd rope around our necks.  I feel increasingly captive to ignorant, stupid and arbitrary decisions that surround our lives, my own life and the lives of those I love.

We have become victims of power imposed on us by pompous decrees and grotesque jokes, that sweeps us up with supposedly liberating speeches about a nation that no longer exists, because it is grounded in big moneyed interests with their craving for absolute rule, their ideal of infinite growth, and their yearning for a phallocentric and ego-derived modernity, immersed in ignorance, ambition and deceit. This is power elite that designs its landscapes of plunder from an easy chair or from the view of a private helicopter.  Destroyed landscapes “manufactured” in the apathy, in a life decoupled from life itself. Because the ignorance and power of capital constitutes an obscene desire to exert discipline and control “over all human bodies”, as Eliane Brum argues, – the bodies of women, men, children, of rivers, waters, forests, animals, of the land itself.

I would like to believe that our rage and pain today contain a thread of hope because they are born of empathy for a vast and suffering territory that connects to us through the Chiquitanía. Thousands of animals scorched, thousands of people under duress, millions of trees consumed. More than a million hectares reduced to ashes. Our Big House is in flames.

The unrelenting destruction of the Chiquitano forest and the Amazon, caused by deforestation, condemns us to a slow death, willfully ignored by those who have brought us to this fateful edge. The forest, the Gran Chaco Chiquitano and the rest of the Amazon region have been a source of life because they guarantee biodiversity cycles, water and the purification of the threatened air on our planet. Within the Amazon is a generous and magical source of water for the continent because the trees produce the moisture in the form of clouds that ‘fly’ with the winds to other regions, carrying rain, empathy and life to the earth. Antonio Nobre, passionate student of the Amazon, has affirmed for some time that these “flying clouds”, a product of the magic and generosity of the trees, could be endangered by the effects of deforestation and that these great lungs of air and vitality could begin a process of irreversible self-destruction if deforestation surpassed a certain limit.

In the case of Bolivia, the decisions of President Morales and Vice-President García Linera have led to unparalleled despoliation of the territory and its incredible social fabric. Their wager on ethanol, their permissiveness regarding GMOs and the resulting expansion of cultivation, their stimulation of large-scale cattle raising for meat exports to China at great scale, their deregulation of limits on small-scale farming, their policies to expand gas and oil extraction in Bolivia’s forests, including even their absurd consideration of fracking as an alternative, go hand in hand with their recently approval of Law 741 and Decree 3973 which authorize “controlled fires” to expand the agricultural frontiers in times of climate change.  The cumulative effect of all these actions has brought on this disaster.

Probably, never before in Bolivia have we experienced such violence against Nature.  And the administrators of these disastrous policies seem impervious to the consequences. Here resides the greatest danger: ignorance of the damage and destruction produced by their own actions and the consequent lack of limits due to the culture of impunity embedded in the bureaucracy of the Plurinational State, what Hannah Arendt called the “banality of evil”.

We have been like the walking dead: “something happens to us”, people say, “and we no longer react, whereas before, a single cry against the imposters could trigger a rebellion.” Today we are eclipsed by the mechanisms of a power structure that bloats with impunity, abetted by the orators of manufactured populism. Now that almost everything has been destroyed, the main culprits of this tragedy elaborate an “alternative truth”, Hollywood style, to rearrange the pieces on the board. The tragedy of fire and devastation is blurred with the ostentatiousness of a rented Supertanker airplane now arriving from the USA to save a “small village” from fire. “Climate change” begins to dance in the mouths of the deniers, and yet will not have any consequences in their future decisions.

But history can be unforgiving and Morales will be sadly remembered from now on and forever as the greatest indigenous predator of the Amazon and the Chaco. This tragedy, provoked by his political and economic ambition, both ego-driven and authoritarian, must be documented and explained to subsequent generations. We should continue to make reference to this tragedy so that we learn  to take care of, restore and protect the little that remains; so that what counts is not the fraudulent intellectualizing by the likes of García Linera, who disguises injustice and destruction, but instead, an awareness of limits, to know that fire burns, lack of water kills, machismo degrades, violence destroys, political calculation and ambition corrupt and that too much time wielding power is unhealthy and can become criminal.

We need limits, says the Brazilian theologist and ecofeminist Ivone Guebara, and I believe that the awareness of these limits must be constructed with love, but also with rebelliousness and disobedience, with the force of indignation that is born from an “ethos” of caring for life, today absent in the governments of the Americas. I don’t know if we still have any time left.

Perhaps the only hope is in our bodies, that have an intrinsic memory, and in movement itself, and in self-reflective and relational interconnections. Today the only possible rebellion is the body in connection with nature, an alliance with other species and the beings that were born together with humans, those beings that became captives to the capitalist, patriarchal and ecocidal rationality. Our body contains sensations and it can transform the sensation of being oppressed, immobilized and fearful into the opposite sensation of rebelliousness and the search for new horizons in a healing earth. From this sweet earth, still burnt and near death, covered by the bodies of trees and sacrificed animals, come the ashes that, in the profound pain of our being, are moving a vital connection in our internal waters: our mind, feelings and heart.

Feelings that the chiefs of plunder will never understand.

* The Spanish version of this article has been published in the OBCCD (Bolivian Observatory on Climate Change) https://obccd.org/2019/08/25/la-vida-en-llamas/ the 25th August 2019.

** Elizabeth Peredo Beltrán is Social Psychologist, writer and activist on environmental and gender rights. Works as independent researcher asociated to the Bolivian Observatory on Climate Change, is part of “Trenzando Ilusiones” (Weaving Hope) initiative, belongs the Food and Water Watch Board of Directors, the Socio Scientific Committee at the Terre Citoyenne University and collaborates with the Latin American Alliance against Fracking.