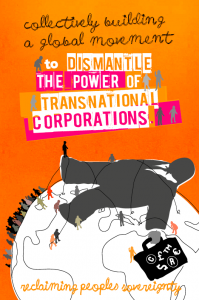 Geneva, October 27 – More than 200 delegates from more than 80 countries representing social movements, trade unions, and global civil society,(1) including communities affected by the human rights violations of transnational corporations are actively involved this week in the third session of the open-ended intergovernmental working group for the elaboration of an International Legally Binding Instrument on Transnational Corporations (TNCs) and other Business Enterprises with respect to human rights.(2)

The process of drawing up a binding treaty is underway due to the will of those affected by the violations to arm themselves with an international legal instrument to defend themselves, as well as through the acknowledgment of several governments that a treaty is necessary to stop the growing imbalance between human rights and the actions of TNCs. Ninety-five countries were present at this week’s talks, a remarkable number for such an intergovernmental working group. In addition, members of parliaments from more than 20 countries and the European Parliament,(3) as well as more than 700 civil society organizations have indicated official support for the process.

Pablo Fajardo, representative of the Union of People Affected by Chevron, recalled that “the victims of corporate crimes, which occur worldwide, are witnesses that today most violations of human rights are by transnational corporations. The binding treaty is a real and practical tool to protect people from the violation of their human rights. “

Tchenna Maso, from La Via Campesina, affirmed that “all governments that oppose the creation of this instrument not only go against history, but clearly act complicit with the violations of TNCs. We draw particular attention to the position of the European Union which is obstructing the process. Hiding behind a supposed internal inertia of its member States, the EU is in fact aiming to definitively stop the process. We call on governments from other regions to come together to resist the pressure from the EU, and stand up for their people.”

Mary Ann Manahan, World March of Women-Philippines, stressed that “social organizations will continue to respond to crimes against affected communities and territories as a result of TNC activities and will continue to mobilize for the elaboration of a draft treaty in advance of the fourth session of the intergovernmental working group.”

Karin Nansen, chair of Friends of the Earth International said: “We look forward to the draft text of the treaty to be presented by the Chair-Rapporteur of the Open-Ended Intergovernmental Working Group in 2018, and will continue to bring forward the peoples’ demand for a legally binding treaty to achieve justice for the victims in accordance with Resolution 26/9. Taking into account the interest expressed in several national parliaments, such as France, Spain and Uruguay, among others, the debate should be broadened and strengthened. Parliamentarians from other countries must join the process.”

(3) For the list of signatories of the Interparliamentary initiative for a UN Binding Treaty on transnational corporations with respect to human rights see http://bindingtreaty.org/

To arrange interviews or further information